There is a question often new YouTubers ask me How To Get Views From Sources Other Than Search On Youtube. For example, someone is running a comedy channel then how can a comedy-oriented channel rank in search because nobody is going to search by its title. And if video views are not coming from search then how it will get views. That’s a really good question.

I’m sure there’s a lot of people reading this article, that have channels to where you’re thinking to yourself You know what search doesn’t really fit into what it is that I’m doing. And that’s perfectly okay. Because search isn’t necessarily for everyone.

I mean don’t get me wrong if you can tap into search do it as part of your content strategy, But not every channel is a perfect fit for trying to rank videos in search. And after hearing that you might be thinking to yourself oh my gosh I’ve been doing it wrong this entire time.

How To Get Views From Sources Other Than Search On Youtube:  Analyze Your Niche First

Here’s the thing when it comes to youtube search. It’s very specific in terms of people are looking for a specific thing. And when they look for that specific thing then you want to be able to show up and search now.

Don’t Try Too Much If It’s Not For You

When it comes to youtube search, it is a very bad approach. And the reason that it’s a bad approach is that youtube is trying to show people the content that is most relevant to them that they are the most likely to enjoy.

But if your content doesn’t support what somebody would actually expect, when they’re looking for that particular thing in search, when really you’re just completely wasting your time.

Make Your Sources Of Views According To Your Content

Here’s what I mean. If you are doing comedy content then trying to basically build your entire video’s metadata around a specific keyword phrase, isn’t necessarily going to be the greatest fit for you. Whereas thinking of it from a bigger picture point of view in terms of people come onto youtube and youtube is presenting content to them that they’re most likely to watch.

Take A Look At What Is Trending

But in a nutshell, when you think of getting your videos in front of people, you have to think from a different perspective. You have to think about when I make the topic of this video if I’m going to be making comedy content or any type of content, I need to think about the people that I’m trying to reach and the things that they might be interested in. That would bring them to my content or that would help youtube show them my content. This is why people like me.

This is why we tell people so much to pay really close attention to things that are trending. That’s because when you’re paying close attention to things that are trending, you can tap into the general interest of a specific topic. YouTube Creator Academy also says that if you design your content around some Trending topic it will benefit your channel. You can check this article here. 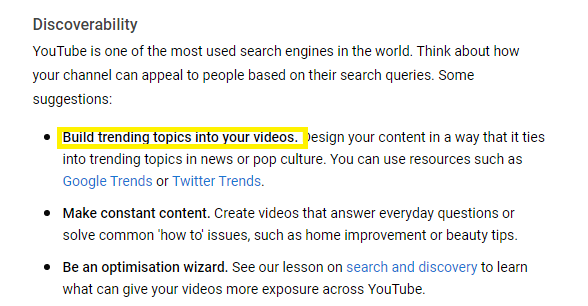 Consider What People Are Talking On Social Media

For example, if there’s a big movie that’s coming out, or there’s a big event that’s happening in the world, or a big event that just a lot of people are paying attention to it doesn’t have to be global, but just if there’s something that is happening that people are paying a lot of attention to, then that allows you to be able to tap into the interest that people have at large.

This is why you see a lot of music channels when there’s a popular artist that makes a song about something, and there’s a lot of widespread interest in that particular song this is why they make covers about it.

Because in that situation what they’re doing is, they’re tapping into that wider interest of people that are listening to that song or sharing that song with their friends and things like that.

This then will help youtube identify hey this content creator is making this particular video and they’re getting a really good response, people are enjoying it, they’re sharing it, they’re coming back, they’re listening to it or watching it more. Therefore, other people that have been interested in this particular topic or this particular song are also somebody that we should possibly show the content from this creator. Show it to them on their home page instead of something else.

So if you’re making comedy videos try to make your comedy about something. Now if you’re thinking to yourself like oh well that’s great but you know I want to do the original stuff. I’m not saying to do cover comedy. I don’t even think that’s a thing but what I am saying is you need to think of how you can wrap things that people are interested in, into the comedy that you’re doing.

So that you can have the chance to get in front of more people based on the things that they’re interested in you to know.

Another example of this would be like let’s say that you have a channel where you’re talking about dogs. If there’s like a popular dog breed like some new hybrid that somebody made, then in that situation you would want to make sure that you make some content about that because then in that situation again you’re tapping into that interest of that particular new dog breed

So you don’t have to necessarily make a video titled for that in search. You just have to think about how can I write this title and how can I put a thumbnail together that would make this interesting for people who are interested in that topic.

How To Send YouTube A Positive Signal For Your Video

I’ll send positive signals to youtube showing them that people are enjoying this content and then they will be more likely to put this content about this new dog breed in front of new people, that will bring new people into my channel as viewers that I can hopefully convert as a subscriber.

Because they like that dog breed content or even if you’re making jokes about that dog breed in your situation, it would give youtube the information that it needs for their systems to show your content to people that are interested in that topic.

Try To Optimize Your Video Topically

I’m trying to think of how I can say this to really make it hit home. And I think I’ve got it. If you don’t make search-based content that isn’t a good fit for youtube search then what you want to do in your situation is you want to optimize your video topically.

What I mean by that is you want to make sure that in your title your description and the actual content of the video, that it is crystal clear what it is that you’re actually talking about what the content is about.

So if you’re doing comedy in that situation then you have to think about okay I’m doing comedy here but what is it that my video is about. In terms of what is it that I’m making this comedy about. So that I can optimize around that so that I can tap into the interests of the people that are on youtube that are interested in that specific topic to increase my chances of getting on the home page of people that are interested in that particular topic.

But here’s the catch to this whole thing and this applies if you’re going search-related content or if you’re just trying to tap into all the recommendation features, by really paying attention to what it is that you’re doing with your titles and thumbnails and content.

But at the end of the day, it still comes down to how people are responding to, what it is that you’re doing so. Even if you are optimizing for the topic approach, in that situation you still have to be able to get people to click on your thumbnails and titles and enjoy your content and further engaging your content as a bonus.

The same thing applies to search. There’ll be a lot of people that’ll reach out and back hey I’m doing all this stuff, I’m using the right keywords and the right keywords phrases and I think I’m making good thumbnails but what they’re not realizing is that the content itself isn’t something that people are enjoying, therefore, it doesn’t stay in search results for that long.

So even if you are optimizing for things topically or for search whichever approach it is that you’re taking then in that situation you have to make sure that people are still responding to what it is that you’re doing. Because if they’re not responding then you’re going to be dead in the water right out of the gate and it doesn’t matter what approach that you take you to have to at the core of it.

All right at the heart of everything you have to be able to make content that people enjoy. And if you want to learn about how you can get more views on video by the video you can read this article. Thank you so much for reading till the end. I’ll see you next time.