I see a lot of new YouTubers ending their videos in a way that’s costing them views and I don’t mean just having people watch another video I’m talking about just blowing it making a huge mistake. So I’m going to tell you How To End A YouTube Video in the smartest way and we’re starting right now.

How To End A YouTube Video: You Are Making This Mistake

The very first thing that I see tons of new YouTubers doing is you are ending your videos before the video is actually complete. I know that doesn’t make sense so hear me out. When people are watching your youtube videos, they’re there for the content that you’re giving them, they clicked on the thumbnail and title to get a specific thing from you.

As soon as it’s clear to the viewer that they have gotten what it is that they came to that video for, guess what they’re out of there. They’re looking for something else to watch and it might not be your video. Here’s how that happens.

Let’s say you are watching a video and then towards the end of the video somewhere, let’s say a minute before the video is actually complete you say something along the lines of and that’s how you boom. that’s it.

They’re gone. You just told them that hey that’s how you do XYZ. This video is complete. The information that you just came here for is over. And the same thing goes on. The story’s over. As soon as those words come out of your mouth you’re indicating to the viewer that hey the story that I’ve been telling you all this time it’s over.

This Happen To Most Of the Cooking Channels

The same thing applies to recipe videos. Like if you’re one of those channels to where you are cooking something and while you’re cooking something, you have the whole recipe that you put together, and then you taste it. Look in your audience retention reports.

if you’re one of those channels and make sure that even though, you enjoy it on the taste, test at the end. Even though that you think the taste test is important. Look in your analytics to make sure that your audience thinks it’s important too.

This Also Happen To Most Of the Gaming Channels

And the same thing applies to gaming videos. Like if you’re showing people how to do something, not just a let’s play, you should check your stats for that timestamp. Whenever you say how this thing can be accomplished in this game, your viewer will surely switch from your video.

How It Destroy Your Audience Retention

But from what I’ve seen regardless of the content type, as soon as the viewer gets what it is, that they’ve gotten out of the video. They bounce and the downside of doing those things what they have learned from your video.

So to wrap that one up so we can move on to the next one just in a nutshell, you should not verbally end your videos, you should not let people know hey this video is pretty much complete now we’re just going to fill in a bunch of extra stuff. Respect your viewers and their time and give them a good experience and they’ll keep coming back.

Don’t Do Too Much Instruction To Your Viewers

The next thing people like to do at the end of youtube videos is, they like to ask their viewers to do a whole bunch of stuff subscribe, leave a comment, give this video a thumbs up, share it with somebody you know, donate something, add this to a playlist so you can watch it later you get the idea.

But it’s important to make sure that when you are doing something like that at the end of your videos, instead of having this big length of time that, you spend asking people to do all of this stuff, focus them on something in each video that you put out should have a purpose of some kind.

But videos serve multiple purposes as well. Because people respond to videos in a different way you know or at least you will over time the videos that drive more subscribers when you.

Make that type of content. So in that situation, you might want to use those videos to encourage people to subscribe at the end, instead of a bunch of other stuff.

Make Your Viewers To Travel On Video To Video

if you’re putting a series together then, you need to make sure that you are sending people from one video to another video to another video. In that situation, you might want to not put any of that stuff at all. Because you want people to just click on that next video which brings me to the next thing.

But when you are adding the calls to action to subscribe, when you are inviting people to like your video and things like that, if those are on the screen while that’s happening then you’re doing two things, you’re inviting people to do the thing that you want them to do, which is like or subscribe or comment or visit your website or whatever it happens to be, but you are also giving them the option to watch another one of your videos right there on the screen. Read what YouTube Creator Academy says about End Screen & Cards. 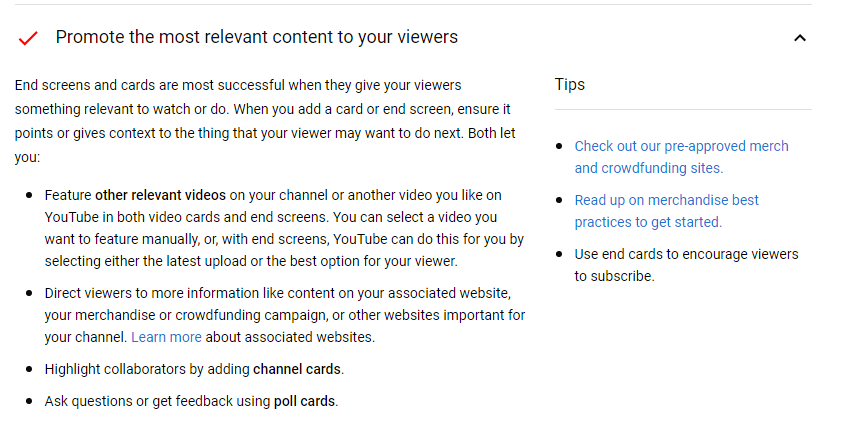 Drop your end screen on them before you ask people to subscribe before you do anything to let people know that the video is complete or coming to an end. I recommend also that some of the stuff that you’re doing at the end of your video is recommending people to watch another video or go into a playlist

And you pick that one but the reason for the two is because if you have the video that you’re trying to drive people into and those people have already seen that video, or some of the people seen that video, youtube is going to show the one that they think is the best for that viewer.

And youtube knows what videos people have watched on your channel. So that video is changing for all the different people that are watching your channel. But the best for viewers to spot youtube is going to show them what would make the most sense for them to watch on your channel.

So you should do it in a strategic way as well to where whatever it is that you happen to be linking to. It is relevant to the viewer but then you also have the one from youtube so you’re kind of hitting two birds with one stone. There in terms of trying really hard to make sure that you are encouraging people to watch something else on your channel.

But again even when it comes to asking people to subscribe or comment or like or even if you want to go through that whole spiel, while you’re going through that so that while people are thinking oh okay I’ve heard this a thousand times or I’m already subscribed or I’ve already liked or commented, then they have an option another one of your videos, that they can click it’s right there in their face, right there on the screen even if they’re on a mobile device watching horizontally.

To learn more about growing your youtube channel and know are on the right path to grow your youtube channel, there is another article you can read here. You can read it and get to know about best practices for your videos and if you haven’t a subscriber to our newsletter yet make sure you subscribe. Thank you so much for reading this article. I’ll see you next time.

3 thoughts on “How To End A YouTube Video (The Smartest Way You Don’t Know: 4 Step Blueprint)”